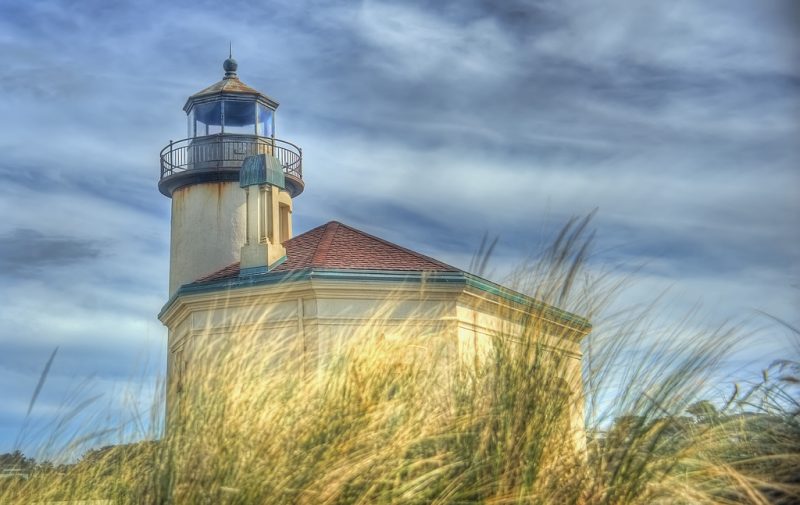 Located along Oregon’s rugged coastline are a number of historic lighthouses that offer the perfect opportunity to see mesmerizing views of the water below, as well as spot a variety of wildlife in its natural habitat, and take an interesting look back in time to a period when lighthouses were crucial for safety.

Every year, thousands of individuals take the time to visit the nine Oregon lighthouses that are open to the public for a unique look at the precarious edge between land and water, as well as the direct connection it provides with nature at its very best.

From migrating whales to frolicking sea lions and seals, lighthouses provide a rare chance to see these mammals in a completely free state. Lighthouses also offer the opportunity to take exquisite photos of the beautiful jagged coast and often choppy waters hundreds of feet below. Finally, with a long history of being haunted, some of these lighthouses give you the ultimate chance to see if ghosts really do exist. If you are planning a trip to the Pacific Northwest, be sure to stop by some of these fantastic historic lighthouses in Oregon. 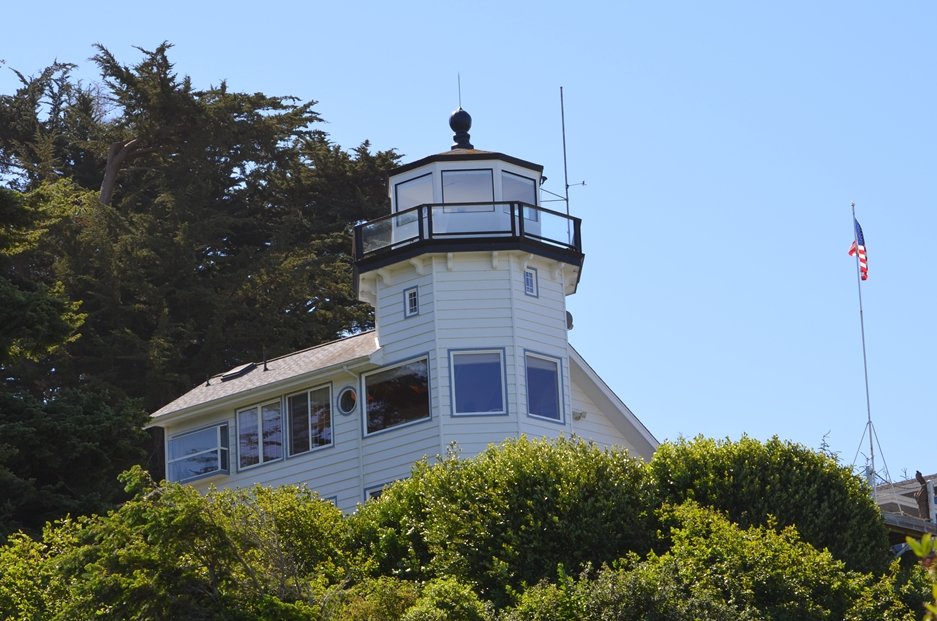 The Pelican Bay Light is a private lighthouse near Brookings, Oregon. The lighthouse was built in 1997 and is owned and operated by the Cady family. This lighthouse lies on a cliff, 100 feet above the Pacific Ocean. The tower rises to approximately 141 feet above the crest of the water and can be seen for over 11 miles. All you have to do to see this lighthouse is visit Brookings Harbor, and you’ll have absolutely no problem locating it. This is the newest lighthouse in Oregon, and one of the newest in the United States. Please remember to respect the owner’s property and privacy, as this is not a public lighthouse. Photo: Neal’s Lighthouse Blog 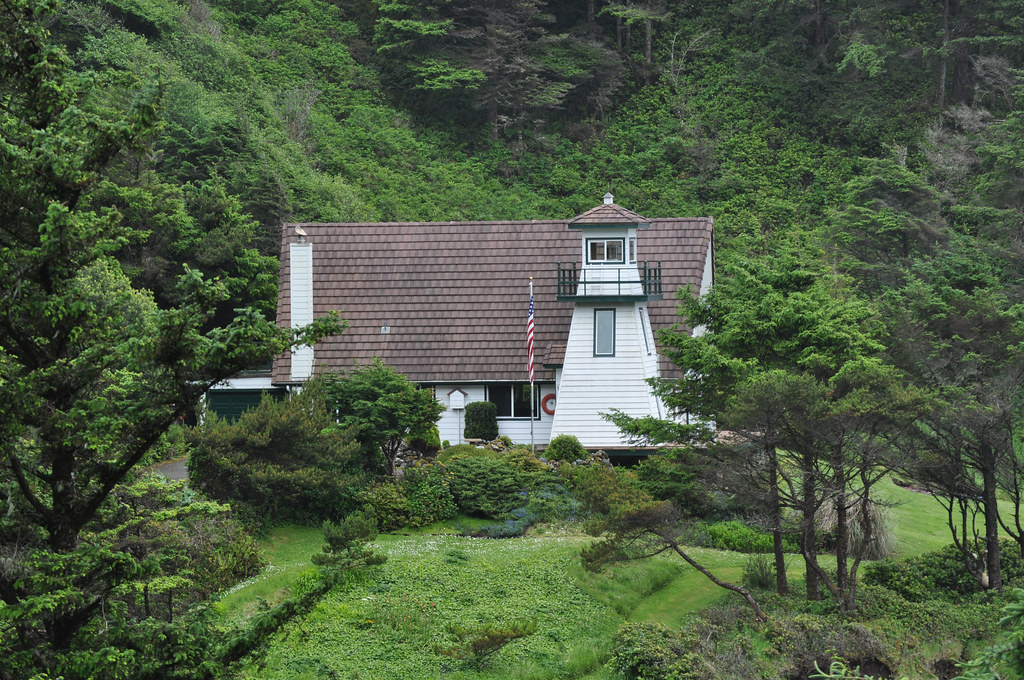 The Cleft of the Rock lighthouse is another privately owned and operated navigational aid, located just south of the coastal village of Yachats. Its design was inspired after the lighthouse in Victoria, British Columbia named the “Fiddle Reef Lighthouse”. The tower rises 110 feet above sea level and the Pacific Ocean. Like Pelican Bay, this particular lighthouse is unavailable to the public and can only be viewed from Highway 101 (mile marker 166). Photo: Mark/Flickr CC 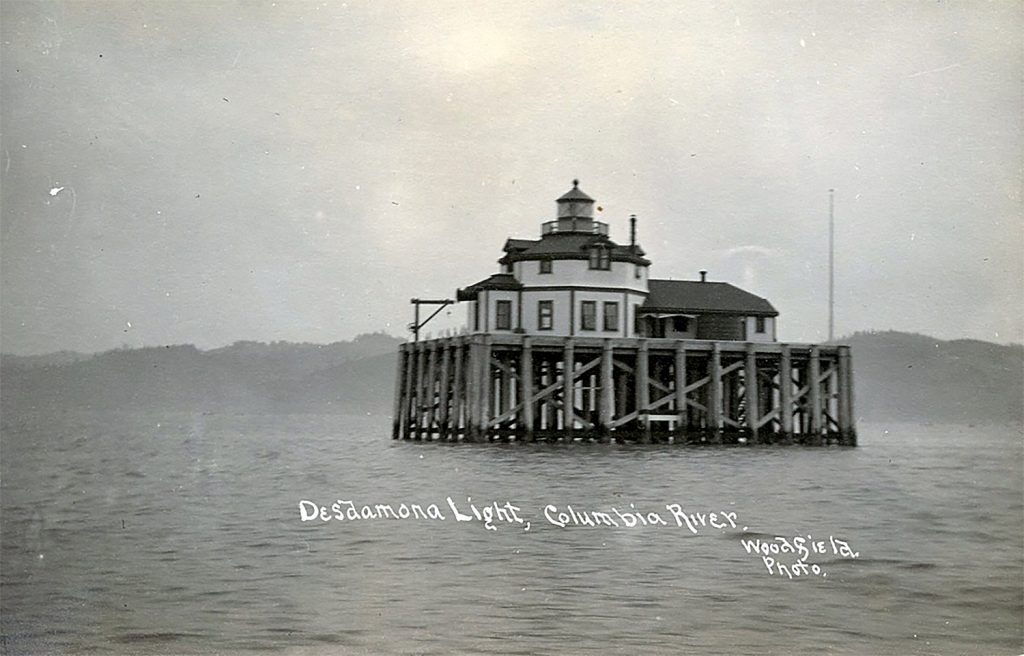 The Desdemona Sands Lighthouse was built in the mouth of the Columbia River, as an aide to navigation around the notorious Columbia Bar. The lighthouse was operated by one man, while his family stayed in the Keeper’s house on the mainland. The structure was built on a foundation of wood pilings, and was finally removed from the river in 1965. Photo: Offbeat Oregon/Postcard

Located in Bandon, the historic Coquille River Lighthouse is filled with displays and photos that detail its history. The lighthouse offers spectacular photo ops, especially of Old Town Bandon, the nearby Bandon National Wildlife Refuge, and the miles of pristine beaches below complete with a driftwood boneyard and wild beach grass.

This lighthouse was an often delayed project in regards to lighthouses, and was abandoned only 43 years after its construction, being replaced by an automatic beacon. The lighthouse was then forgotten about until it was renovated in the early 80’s.

Much like the other historic lighthouses in Oregon, Coquille River lighthouse has a pretty extensive history- nearly hit by several boats striking the small bar that the lighthouse stands on. Opened to the public in 1991, explore the scenic beauty offered by this lighthouse if at all possible. Photo: Anita Ritenour/Flickr CC 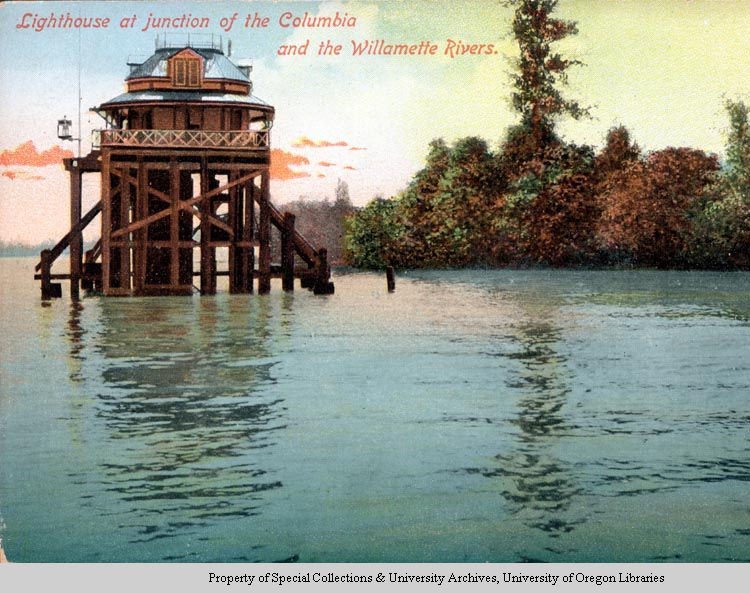 Once manned by a single employee, the Williamette River Lighthouse was built 100 yards from shore on a platform that is 30 feet above water. Unfortunately the unique octagonal lighthouse was destroyed in a 1955 fire. Photo: University of Oregon Libraries 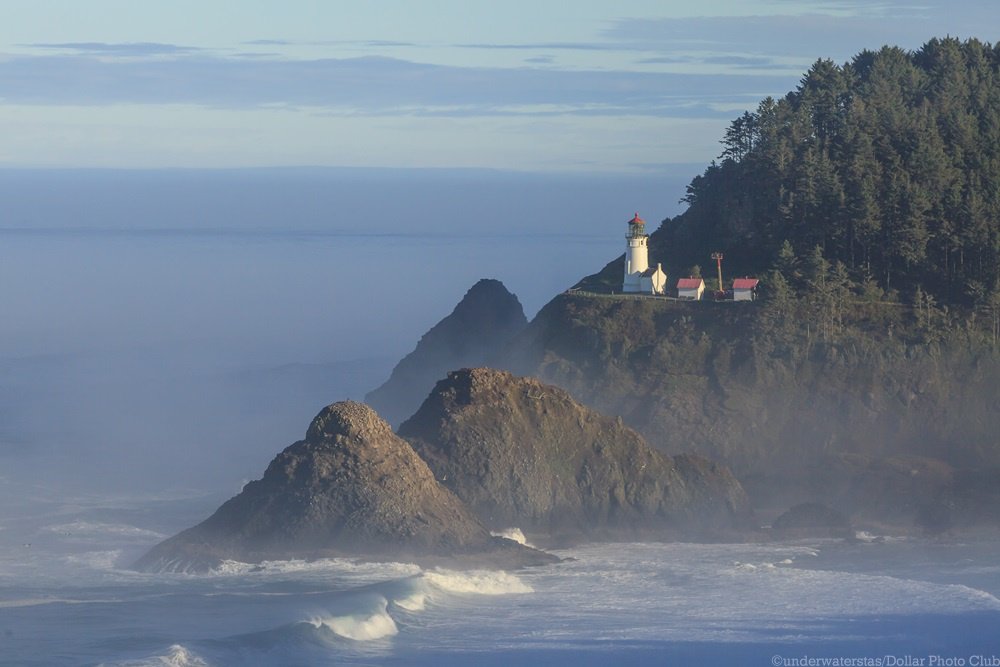 Located about 12 miles north of Florence, the Heceta Head Lighthouse is open to the public and provides the perfect vantage point for catching sight of whales, otters, and a variety of birds. Sitting over 205 feet above sea level, it offers spectacular views of sunrises and sunsets, as well as the bluffs surrounding it and the calm waters below. It is also considered one of the 10 most haunted lighthouses in the U.S., don’t be shocked if you run into “Rue”, though those who have encountered her say she is very nice. 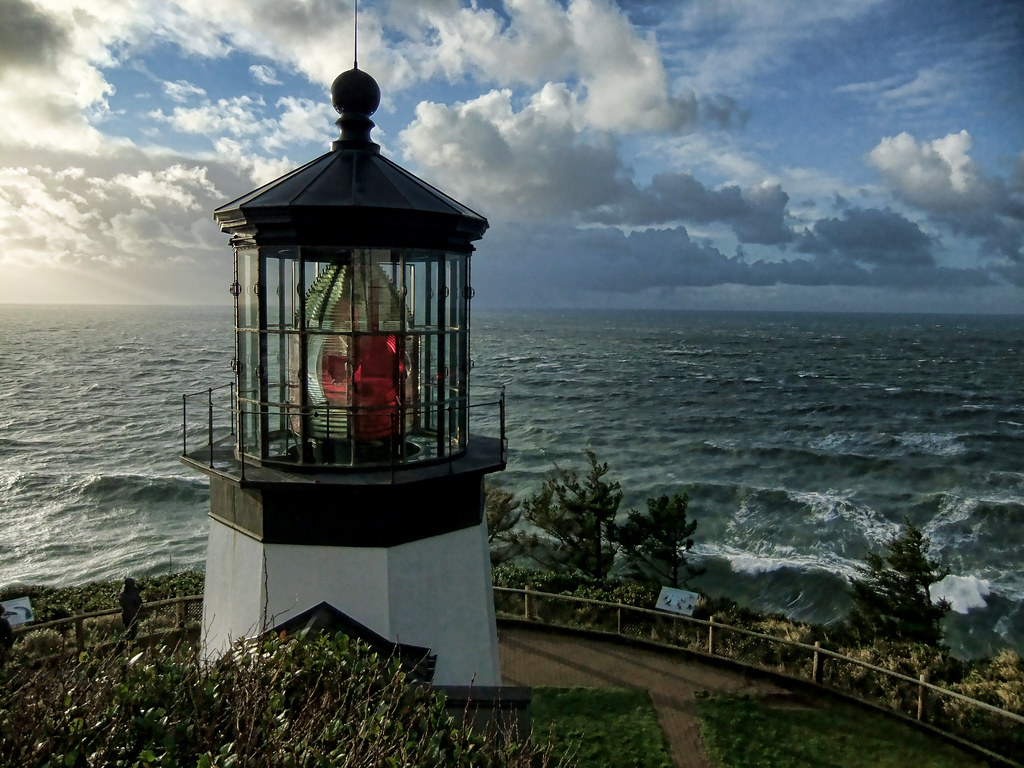 Located close to Tillamook, the Cape Meares Lighthouse is the shortest lighthouse in Oregon, often compared to the “Little House on the Prairie” for its location, beauty and simplicity. It is, however, easily accessible, making it an ideal stop for children and the disabled. It offers gorgeous views of the coastline, the opportunity to catch sight of migrating whales and plenty of native birds, and includes a gift shop. Take the time to visit the Octopus Tree, a tree with 8 bizarrely shaped branches, on the additional trail near the lighthouse. Photo: Peter Roome/Flickr CC 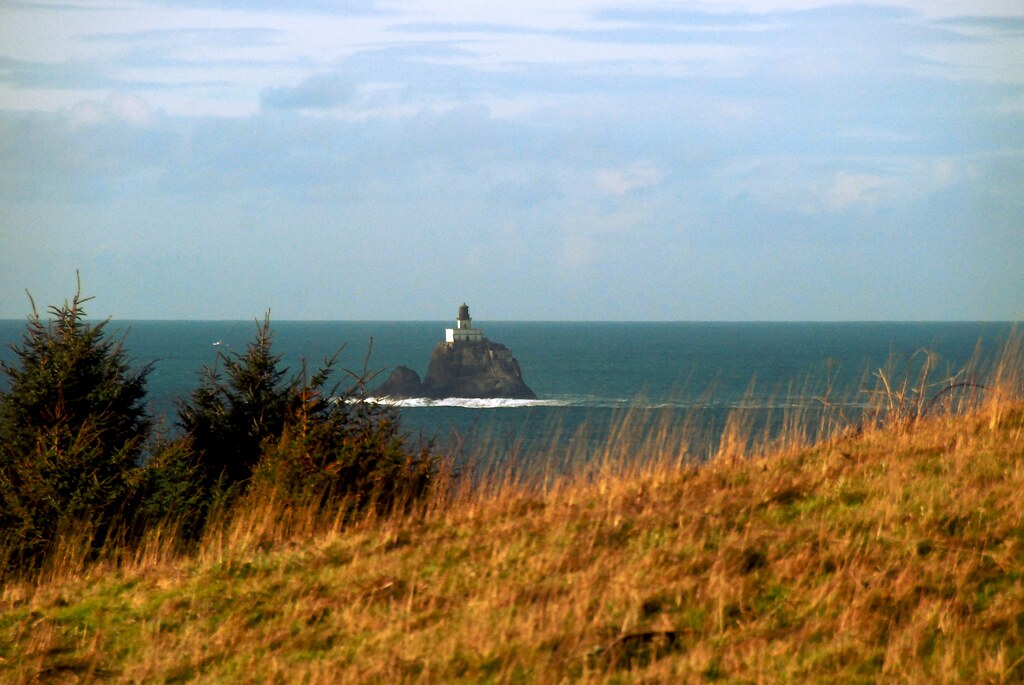 Visible from Ecola State Park and located on a large chunk of rock more than a mile offshore, the Tillamook Rock Lighthouse is known for its macabre twist. Not only did more than 17 men die while it was being built, but it also became a storage house for urns with human remains in 1980. It is currently a privately owned and operated lighthouse in Oregon and cannot be visited, except by helicopter. If you are in the area of Ecola State Park, it shouldn’t be missed , and is worth the trip down to the beach for a look. Photo: chispita_666/Flickr CC

Although it is the smallest lighthouse in Oregon, it is one of two that were operated upriver from the Pacific Ocean. Located on Sauvie Island, the Warrior Rock Lighthouse directs ships up the Columbia River. It can be reached by boat or by taking a three mile hike through a cottonwood forest that includes ponds, wetlands, and sloughs. Photo: EncMstr/Wikimedia Commons 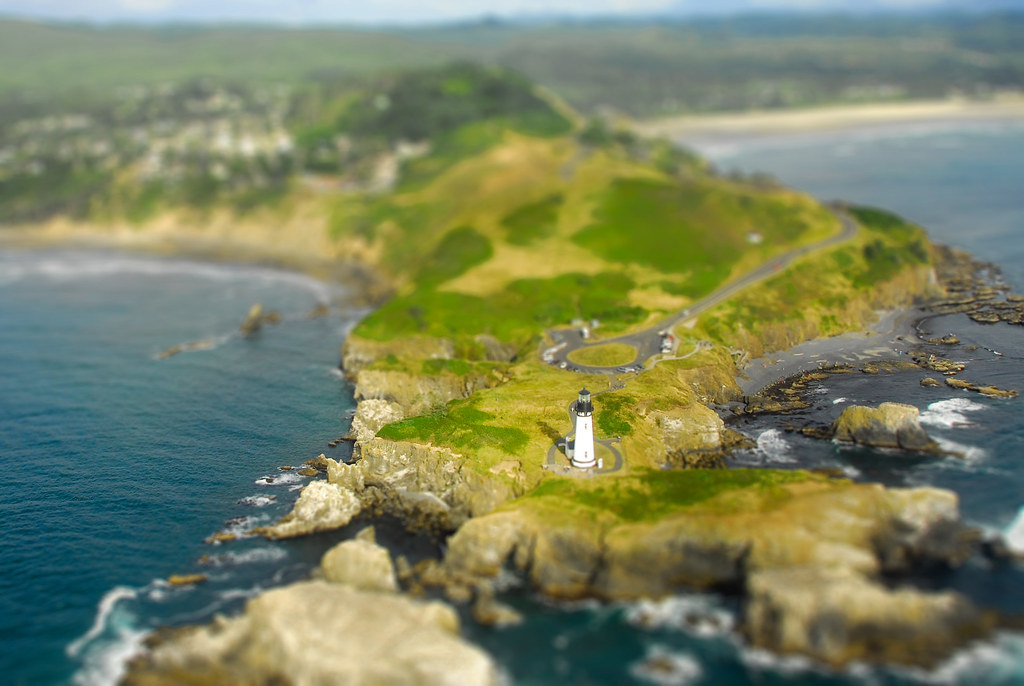 At 93 feet tall, the Yaquina Head Lighthouse is the tallest in Oregon. This traditional design lighthouse includes an interesting museum with kid friendly exhibits, but it is definitely the views that bring visitors back year after year. The tower stands 162 feet above sea level, and is visible for over 19 miles to passersby. From the black cobblestone beach to the tidal pools, nearby mountains, the surf pounding on the rocks below, and the possibility of seeing sea lions, seals, and whales splashing in the Pacific below, there are awesome views from the top. Photo: ArtBrom/Flickr CC 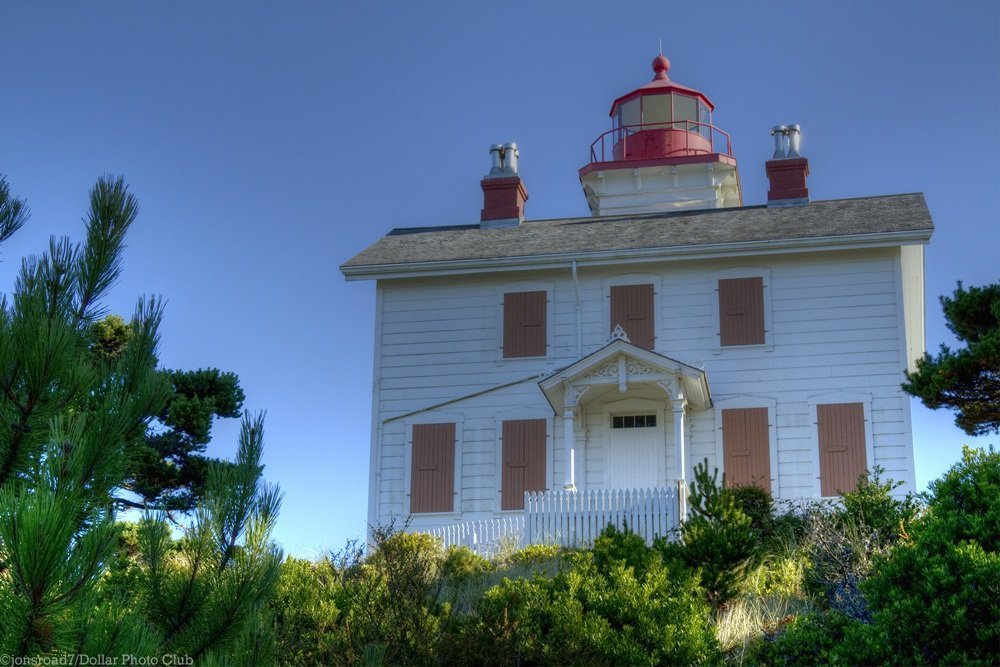 Also said to be haunted, the Yaquina Bay Lighthouse is actually a wooden house with a light on the roof and was only in operation for three years. Today, it functions as a museum and provides a great opportunity to see tons of seabirds, whales, sea lions, and much more. Be careful on the pebbled beach below; it is like walking on marbles. 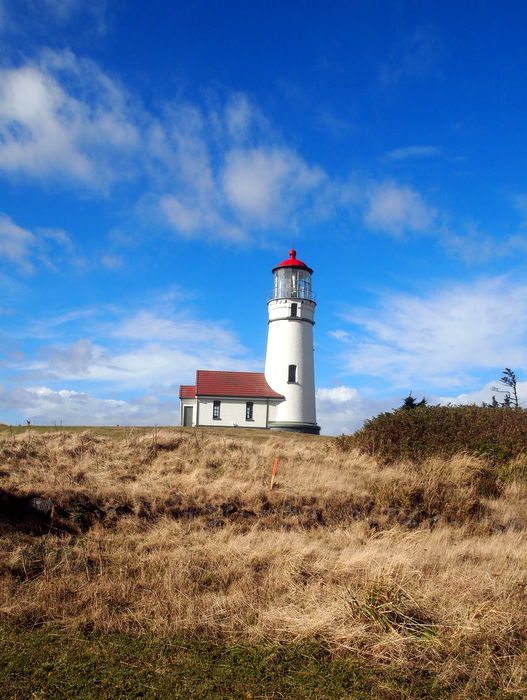 Located in Port Orford, Cape Blanco is a picturesque lighthouse that is also the southernmost on the Oregon coast. Standing atop a 200 foot cliff, blustery winds await you at the top, but the top is definitely worth visiting because it offers impressive coastal views and the chance to look through a Fresnel lens made in the 1800s. Informative volunteers dressed in period costumes provide tours and a small gift shop is onsite. Photo: WatsonsWander 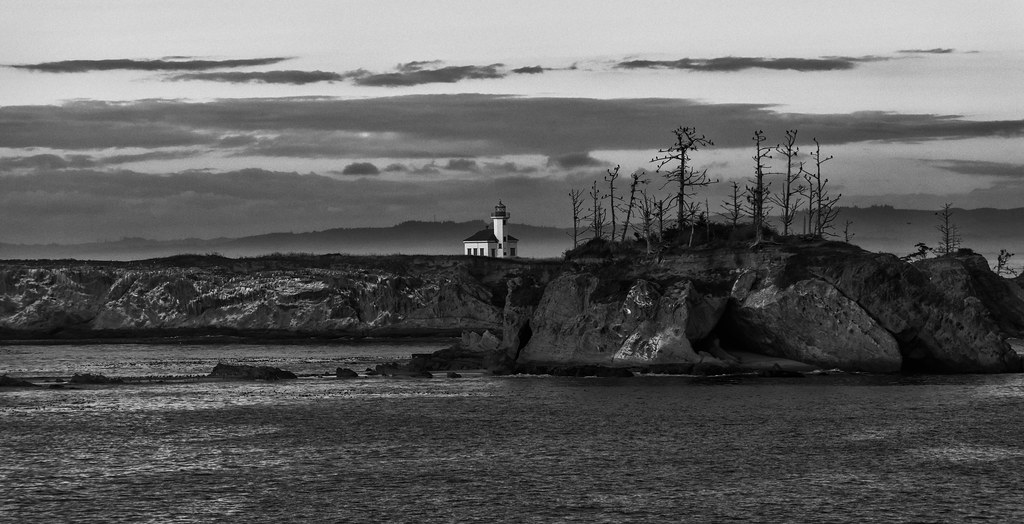 The lighthouse in Cape Arago has had several locations along the rocky outcropping of Gregory Point. The first was done in by erosion and the unrelenting Pacific Ocean elements, while the second location was higher on the island yet still succumbed to erosion. The third and present lighthouse stands 100 feet high and is only visible from the Oregon Coast Trail. At one time, there was a high bridge from the mainland out to the lighthouse station (to eliminate dangerous boat crossings), but was removed in 2012 to restore the natural coastline.

The island and lighthouse was transferred to the Confederated Tribes, which had historical significance to many tribes. To get the best view of this beautiful Oregon Lighthouse, drive out to either Sunset Bay or Shore Acres State Parks and follow signage on the trail. Photo: Rick Bergstrom/Flickr CC 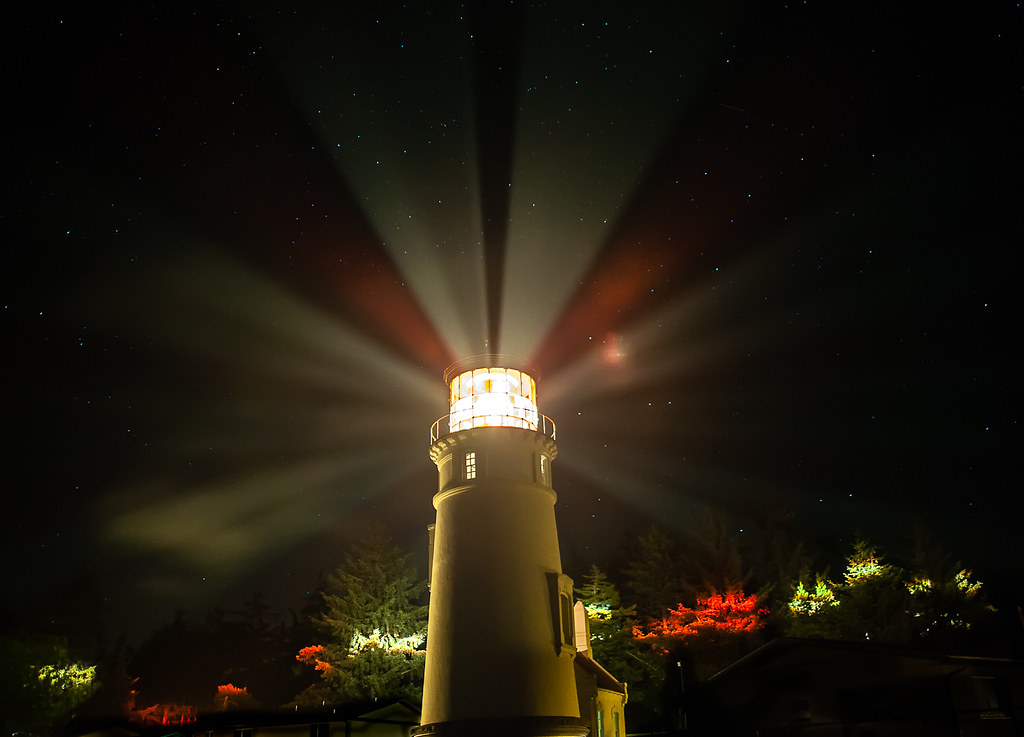 Towering over the entrance to Winchester Bay, the Umpqua River Lighthouse was the first lighthouse on Oregon’s coast. Today, it is home to an extensive collection of historical information that has been well preserved. The 65 foot stair climb to the top is well worth the effort thanks to the exquisite views of the Pacific and the lens that emits a red and white flash.

As Oregon continued to grow in the mid 1850’s, more and more lighthouses were being built along the coast. Umpqua is no different, and was built to shine about six miles south of Reedsport. Unfortunately, this lighthouse was never successfully manned, and fell victim to the ocean’s ravaging elements six years after its conception and design integration. It was a difficult location- a hub for tumultuous weather on a dangerous cliff. Photo: Anita Ritenour/Flickr CC 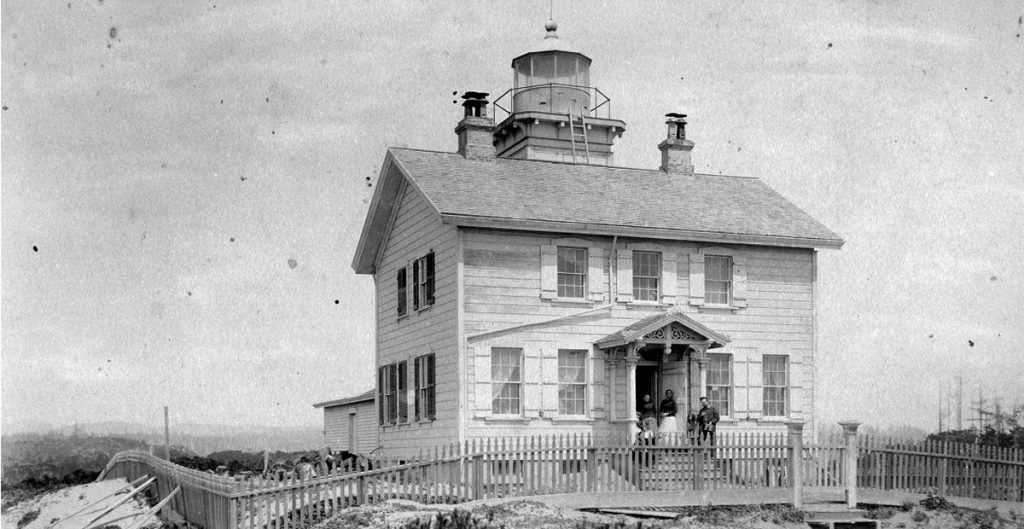 Many of the historic lighthouses in Oregon lighthouses are believed to be haunted because there is so much foul history behind their construction. Many were abandoned mysteriously, decommissioned, and hid from private eyes! Tillamook, Heceta Head, Yaquina Bay, and Yacquina Head are supposedly haunted- but don’t take our word for it, why don’t you go see for yourself? Photo: University of Oregon Libraries 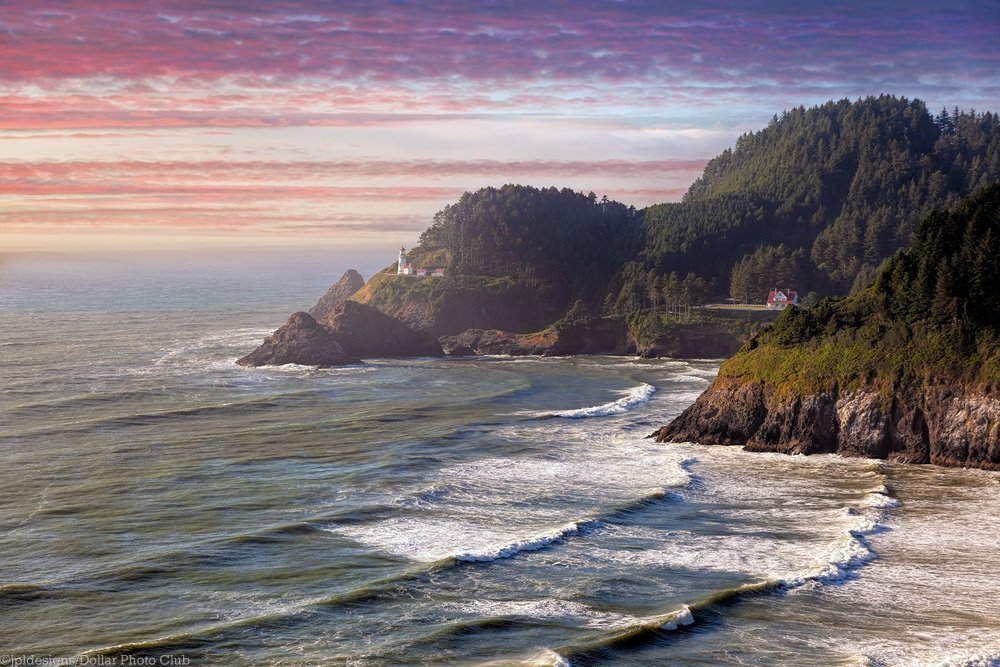 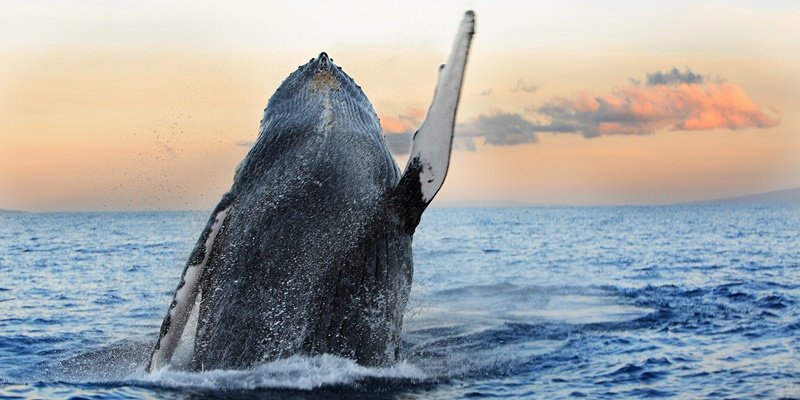 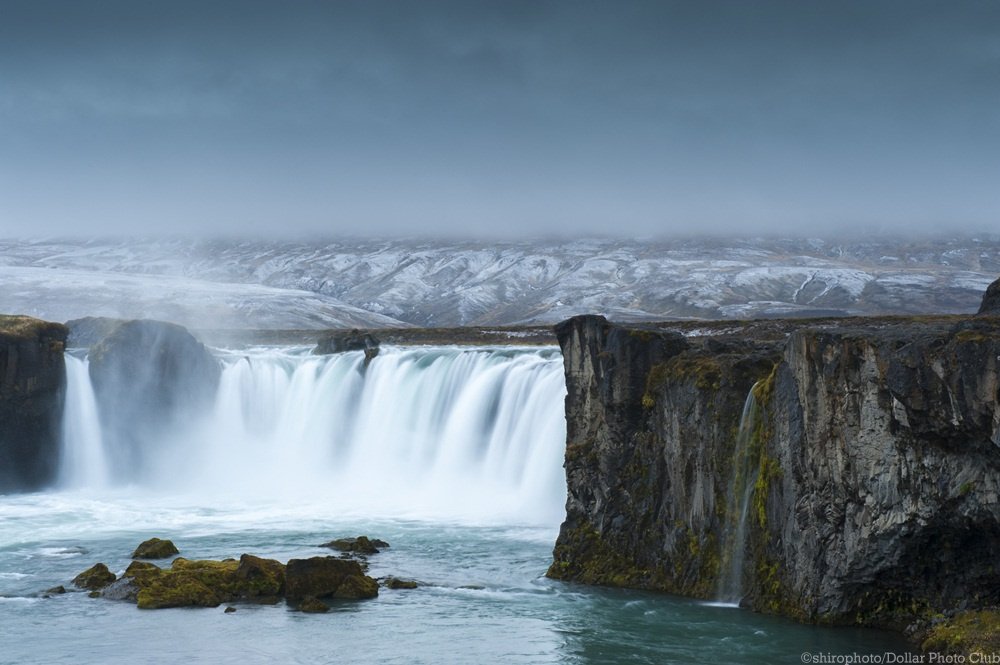 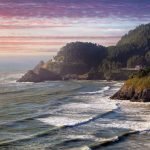 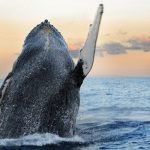 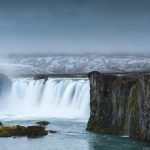 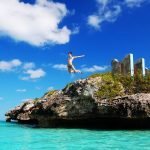 28 of Cuba’s Best, Most Beautiful Beaches 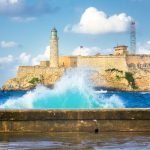